BBC chair: leak of No 10’s choice attempts to destroy independence of appointments

An Opinion Piece by Jean Seaton, published by The Conversation

“Leaks” from No 10 to the Sunday Times published on September 27 about the anointing of Charles Moore and Paul Dacre as the next chairs of the BBC and Ofcom may have been intended to distract the British public from the government’s performance on COVID-19. Getting people into a lather about the BBC is a good tactic. I have, however, no doubt that this is a serious proposition: these candidates are not merely being “floated”, they are the Downing Street choices.

Irrespective of the suitability of the putative candidates, the leaks have blown a hole in the carefully crafted process that has been designed to safeguard all public appointments from nepotism, improper commercial advantage and naked political pressure. Such processes protect all our important institutions, but because of its relationship to public information, the BBC has always been an especially delicate appointment. As an attempt to bully the BBC and, through the attack on Ofcom, all broadcasters, it is perturbing.

More widely, the leak implies a new politicisation of public life, where it is taken for granted that the currently vacant public roles will need to be filled by people who are not merely Conservative but only from that narrow fraction that is sympathetic to the particular strand of conservatism now in power, or members of the court around the prime minister, Boris Johnson. This narrows the pool of talent to a microscopic puddle.

The BBC is a public broadcaster, not a state broadcaster. It certainly has a relationship with the state, but for nearly 100 years it has developed rules, habits, and values of creativity and impartiality that have protected it from interference. It is not perfect, but it is peerless. It is an institution that is relied upon by 438 million users globally and is the foundation of one of our most successful industries, the creative media. It belongs to everyone in Britain, and this universality means that it is obliged to serve all audiences.

Trust in the integrity of its output depends on it being seen as independent from government or politicians. Its authority and reputation require the idea that it has editorial independence – if you like, the right to make mistakes. Consequently, its content is regulated, not by politicians, but by Ofcom. By the way, it is the regulatory overseeing of Ofcom in the public interest that has made Sky a great news channel (owned by the same company that owns Fox News, but vastly different in approach).

While researching for my volume of the official history of the BBC, Pinkoes and Traitors: the BBC and the Nation 1970-1987, I delved a lot into the importance of the role of BBC chair. They hold the BBC to account and are responsible for the broadcaster delivering its services. They help ward off wrong and partisan political pressure, but also make sure the BBC responds to legitimate criticism. They are legally obliged to maintain the BBC’s impartiality. The chair cautions, advises, restrains, and adds insight. They must manage the creation of a board with the right skills to help continually reshape the BBC internally to meet contemporary challenges. A well-run board and a strong chair working with the BBC in the national interest is the cornerstone of an effective BBC.

In the past, the BBC has flourished when the chair and the director general have formed a powerful, cooperative but challenging team. Sir Hugh Greene and Arthur fforde, John Birt and Christopher Bland. Mark Thompson and Sir Michael Lyons and then Chris Patton. While they may have disagreed about editorial decisions or fought about commerce or remit or had to make tough decisions they have to be both working for the same values: to keep the BBC impartial, fearless, decent, independent and alive in the nation and the world’s imagination. They must share a belief in the BBC’s mission to “educate, inform and entertain”.

Anybody alarmed by the flood of misinformation during COVID-19 ought to want a confident BBC. Anybody watching the BBC coverage of the VJ day celebrations this year – thrown together in the middle of a pandemic – saw just that creativity for a national moment at its most warm and grand.

However, chairs can also be the nemesis for director generals. The great Hugh Carleton-Greene was seen off by Charles Hill, the chair that Harold Wilson brought over from ITV. Marmaduke Hussey saw off both Alasdair Milne, who had lost his capacity to deal with a hostile Thatcher government, but also the efficient, reforming Michael Checkland. As the BBC has become more exposed to political pressure, so the job has become more exposed. Although not all these “trojan horses” have been bad for the corporation, this is because they believed in the very idea of the BBC.

Tony Hall resigned earlier this year to ensure that David Clementi, the current chair, would have oversight of the appointment (by an independent panel) of a new director general before he was replaced as chair. In such niceties, propriety lives.

Norman Fowler, a cabinet minister in both Thatcher and Major governments, chaired the committee that produced the House of Lords report on the chairmanship of the BBC in 2007. It’s proposals for “greater separation of ministers from the appointments process to ensure public confidence” given the unique nature of the BBC were accepted. The secretary of state is required to appoint a selection panel including the chairman and the independent assessor. There should be a majority of non-political members and it has to be chaired by a non-political member.

It presciently added that if “ministers add or subtract any names from the shortlist this should immediately be made public through a written ministerial statement to Parliament. The names and details of the candidate should not be made public but the fact of ministerial involvement should be.” The name of only one candidate should then be passed to ministers “specifically to avoid the appointment of a candidate who might share their political priorities. The appointment should be vetted by Parliament.” 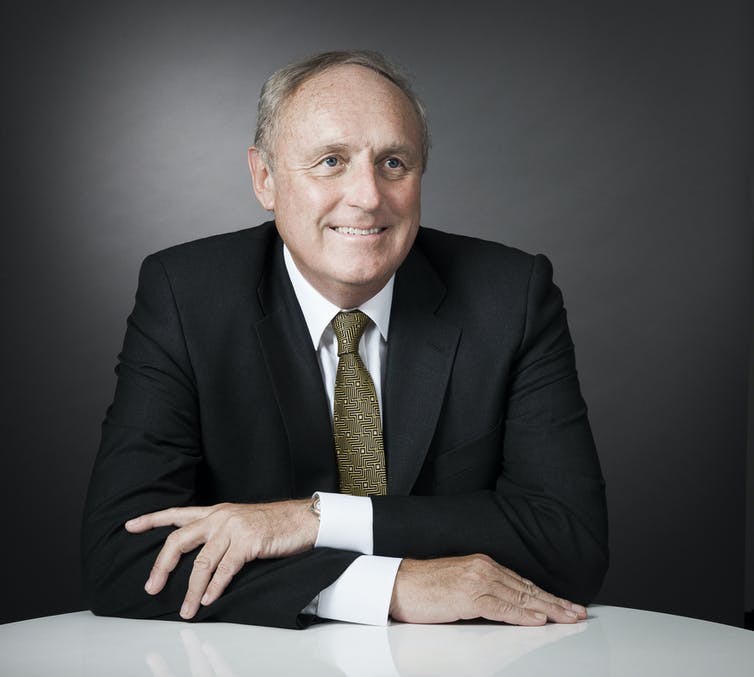 Poacher turned gamekeeper? Paul Dacre is rumoured to be being considered as the next head of Ofcom. Iain Crockart/DMGT/PA Archive/PA Images

The appointment of a chair to Ofcom is similarly supposed to be open and transparent.

But, despite the opportunities the process offers for both the BBC and the government to discuss likely candidates, significant horse-trading can only take place before the formal process opens. You do not want to end up in public complaining about a candidate who then the government might push on through.

So the Sunday Times leaks, the crowning and the drinks, compromise everything – as they were meant to. They turn it into a political battleground and potentially open up any other candidates to contest and opposition. It is another classic manoeuvre: it is a “make any opponent an enemy of the people and then destroy them” tactic.

The process is finally overseen by the Public Appointments Committee. Peter Riddell, the public appointments commissioner, has to approve that the final outcome of the process is fair and above board. No one doubts Riddell’s decency, or indeed capacity: he is a public servant of great integrity who was the founding director of the Institute of Government. But the procedures over which he presides have been leapfrogged by the leak. He is robust – and he may need to be.

Meanwhile, Moore, a man of reputation and scholarship, has been seriously embarrassed by the leak that apparently crowned him BBC chair. He was, until November 2019, a member of that same Public Appointments Committee. His job was to be a guardian of the very process that has now been undermined. Lord Paul Bew – the chair of that committee must be seriously concerned about the reputation of the Public Appointments Committee. Lord Bew is a bruiser from Northern Irish politics (but also a wily and proper man). So the system may well fight back. But it is staggering that this is necessary.

The BBC is well placed to solve some of the epic problems that face broadcasting under its able and focused new director general Tim Davie. One American observer said to me that the BBC was “the only media organisation in the West that has the heft, expertise and power to take the defence of western values out onto a world stage”. We are, after all, in the middle of a cyberwar.

As I noted in a letter to the Financial Times dated September 30, co-authored with Timothy Garton Ash, Will Hutton and Damian Tambini, it matters to us all – and our safety – that such appointments are not made by leak, but by estimating fitting and proper talent in a decent process. Watch this space.