A Book by Paul Dwyer, published by Routledge 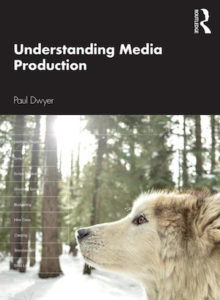 With detailed contemporary examples, including Pirates of The Caribbean, Game of Thrones, Love Island and PewDiePie’s “letsplay” videos, Dwyer highlights similarities and differences in the production strategies and styles used for a wide range of media products. The book tracks the evolution of these entertainment formats and the emergence of the media businesses which produce them. Chapters describe the key production practices associated with each format, including single and multi-camera filming, news reporting, three-point lighting and gameplay animation. They also explain the development of the production roles associated with these content forms; directors, producers, reporters, correspondents etc. The book goes on to explain how media businesses have used new technologies and production innovations to reduce costs and increase profits, resulting in dramatic changes to established production practices and roles.

By comparing media production across media industries, in the UK and US, and illustrating the links between economic, sociopolitical and cultural influences on production, Understanding Media Production opens up a constructive debate between media practitioners and theorists about key questions of creativity and innovation in production.

I’m Director of Academic Enterprise for the Westminster School of Media Art and Design, responsible for consultancy, contract research, knowledge transfer, executive education and technical short courses. I am a board member of Music Tank and the China Media Centre.

I am Course Leader of the MA International Media Business and I also teach on the MA Media Management course.

My research work is in the analysis of media production, social media, online radio, creativity and digital transformation of creative organisations.

My professional practice interests are in media production and management. I run format development workshops for professionals. I have acted as strategic consultant TV companies and cultural organisations.