An Opinion Piece by Matthew Linfoot, published by BBC Blogs

Radio has had a special quality for gay and lesbian audiences: it can be immediate and informative, but also anonymous, illicit and intimate. Archival research, drawing in part on my own past BBC career, reminds us that while a nervous BBC tended to hide away gay and lesbian voices and coded queer references in the post war era of broadcasting, by the closing decades of the 20th century there was a transformation from isolated and sporadic minority representation to the out and proud confidence of regular series and shows on network and local stations in the 1990s.

A queer presence began to emerge in the wake of the gay liberation movement in the early 70s. In 1972 for instance, Radio London’s phone-in programme Platform featured a debate with the Campaign for Homosexual Equality, but balance had to be maintained, which meant there were also anti-gay participants on hand to give their view. As the producer apologetically told the Daily Mail: ‘There is no question of trying to recruit homosexuals.’ By 1983, there was a gradual shift in outlook: an item on the short-lived open access gay programme Gaywaves, which ran on the unlicensed station, Our Radio, promoted a public meeting with BBC London staff titled ‘Radio for Gay People’.

By the 1990s, social attitudes progressed further, particularly in metropolitan centres, as witnessed by the development of queer commercial bars and pubs, whose advertising power funded a growth in gay and lesbian magazine and newspaper publishing. The BBC’s 1992 report Extending Choice made the case for more diversity in its output, particularly in the way community voices and identities were represented.

The first major landmark programme was a one-off special, A Sunday Outing, presented by Matthew Parris and Bea Campbell on Radio 4, on 14 February 1993. Coming from the BBC’s flagship speech network, it was a bold move that caught the attention, but tried not to cause any offence. It followed a magazine format, ticking off all the major issues of the day: coming out, definitions of gay and lesbian communities, queer rights, religion and homosexuality, HIV/AIDS, policing homophobic crimes and representation in the media.

But once the BBC opened the door on queer radio in the early 1990s, a range of different programmes quickly developed, aimed at specific audiences and stations. Each show put queer voices on air, to tell stories of identity and community, challenging accepted notions of society and politics, arguing for equality, and without the requirement for homophobic voices in the interests of balance.

Radio 1 broadcast a five part series, Loud and Proud, from August 1983, featuring music-inspired gay and lesbian interviews and features, with guests such as Neneh Cherry, Boy George and Ru Paul. It didn’t shy away from controversy: it tackled subjects such as sex education for its young audience, despite the editorial and legal complication that the age of consent for gay sex was still 21 at the time. Notwithstanding a short run, Loud and Proud helped establish a presence for Radio 1 at subsequent gay pride events in London, often hosted by Kevin Greening.

Radio 5Live launched a topical programme in April 1994, Out This Week, created by the core production team from A Sunday Outing. Alongside the weekly diet of gay and lesbian news and current affairs, the team capitalised on the creative potential of exciting audio from the greater global queer world, such as outside broadcasts from New York to mark the anniversary of the Stonewall Riots and the Gay Games in 1994, from Soweto, in 1996 and San Francisco the following year. 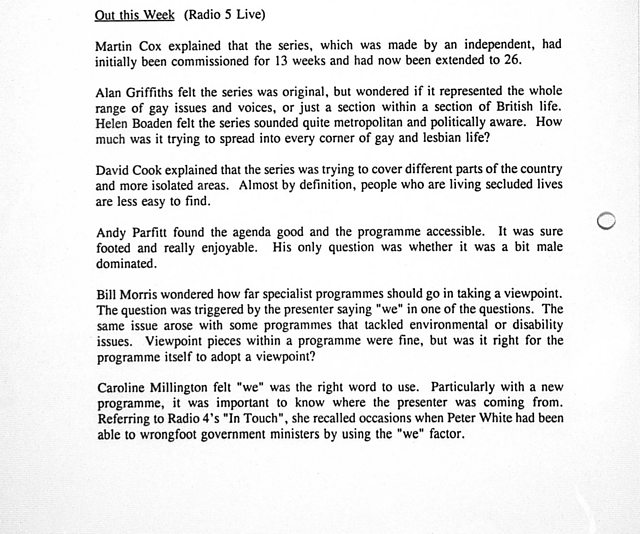 An extract from the Programme Review Board, 1 June, 1994, when Out This Week was under discussion. Note the interesting comments on the use of ‘we’ by the presenter

Meanwhile on local radio, Radio London’s successor, BBC GLR 94.9, aired a weekly community magazine show, Gay and Lesbian London, which started in March 1993, and BBC GMR in Manchester, launched Gaytalk, in 1995. Both these programmes reflected community life from a local perspective, but with different approaches. Gaytalk frequently reported stories from and about the commercial gay scene in the Manchester village, whereas Gay and Lesbian London, while not ignoring the equivalent scene in Soho, often featured aspects of cultural and social queer lives in a domestic setting. For example, the programme ran specials on gay and lesbian parenting (still quite a relatively taboo subject), the lives of older LGB people, and one on relationships. 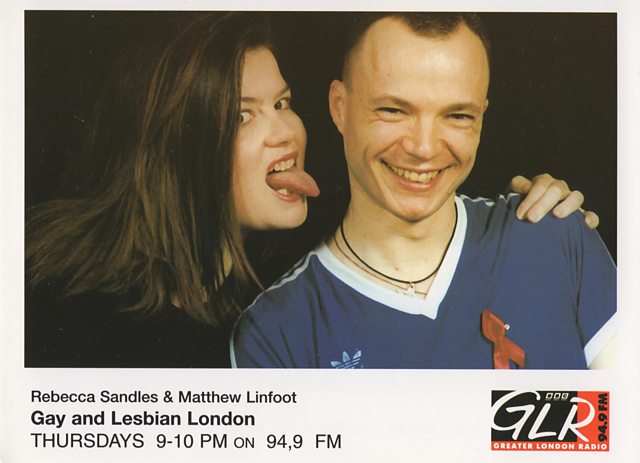 As the decade progressed, all three programmes continued to report on the struggle for equality, and anti-discrimination legislation, advances in the fight against HIV/AIDS and LGBT visibility. The change in political climate was confirmed by the election of the Labour government in 1997 and the introduction of many reforms, and with them, this phase of queer broadcasting drew to a close. Out This Week bowed out after five years, Gay and Lesbian London morphed into an entertainment and culture show, The Lavender Lounge, before ending in 2000. Only Gaytalk maintained its presence at GMR until 2006. 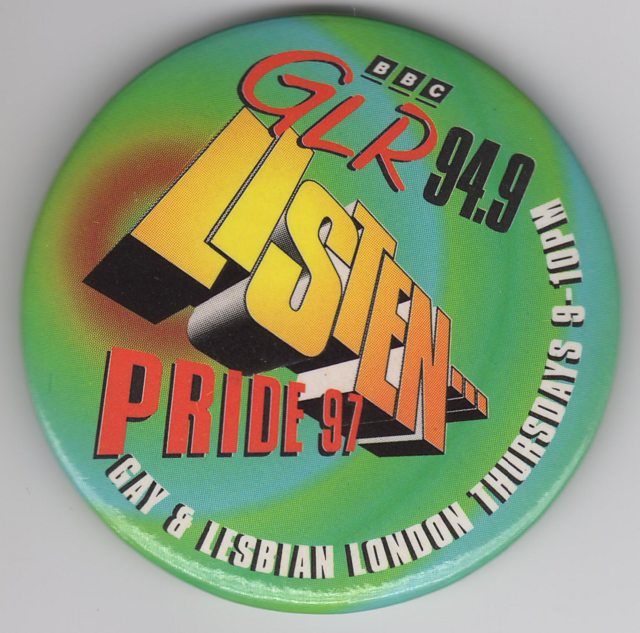 Badge produced by BBC GLR94.9 to promote Gay and Lesbian London at Pride, 1997

Overall, this emergence of LGBT radio on the BBC contributed to promoting diversity and representation, and not only for the listeners hearing voices and stories they could relate to. They provided opportunities for LGBT broadcasters and producers to find a niche in BBC output, to learn their craft, experiment with creative programme ideas and shake up formats and genres. Despite the fact that these pioneer programmes were broadcast in the pre-‘listen again’ era, they helped pave the way for the next generation of specialist LGBT broadcasting, including podcasts and digital stations.

Before joining the University in 2003, I worked at the BBC in a variety of roles. I was the presenter & producer of a weekly magazine programme at BBC GLR94.9 (1993-2000), as well as producing a sixteen part series of oral history programmes about London, The Century Speaks. I won a SONY Gold Award (Best Music Documentary) for producing & co-writing You’ve Got To Hide Away, with Tom Robinson, which explored hidden gay sexuality in popular music. Latterly, I was the editor of the BBC London website before moving to BBC Nations & Regions to work on two major and exciting projects, A Sense of Place and Voices as a senior producer.