The Monarchy, ‘Popularity’, Legitimacy and the Media

A Book Chapter by Jean Seaton, published by Hart Publishing 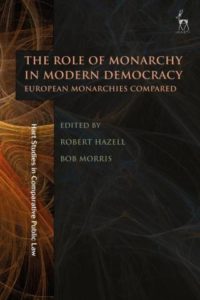 Monarchy is the subject of endless fascination and media speculation, but also subject to myths and misunderstandings. A new book by Professor Robert Hazell and Bob Morris hopes to develop a better informed public debate about our expectations of the monarchy, its role and its future; and to widen the insular British debates by including European perspectives. Within this book, Prof. Jean Seaton explores the relationships between he Monarchy, ‘popularity’, legitimacy and the Media.

There are seven other parliamentary monarchies in Europe, including some of the most advanced democracies in the world. In 2019 the Constitution Unit at UCL convened a group of academics from across these countries to explore a number of important questions: What is the monarch’s constitutional and political role? How much power does the monarch have? How is the monarchy defined and regulated? What is the role of monarchy in a modern democracy?

These are some of the questions considered in this edited collection on the monarchies of Europe.   The book is written by experts from Belgium, Denmark, Luxembourg, the Netherlands, Norway, Spain, Sweden and the UK. It considers the constitutional and political role of monarchy, its powers and functions, how it is defined and regulated, the laws of succession and royal finances, relations with the media, the popularity of the monarchy and why it endures.

No new political theory on this topic has been developed since Bagehot wrote about the monarchy in The English Constitution (1867). The same is true of the other European monarchies. 150 years on, with their formal powers greatly reduced, how has this ancient, hereditary institution managed to survive and what is a modern monarch’s role? What theory can be derived about the role of monarchy in advanced democracies, and what lessons can the different European monarchies learn from each other?

The public look to the monarchy to represent continuity, stability and tradition, but also want it to be modern, to reflect modern values and be a focus for national identity. The whole institution is shot through with contradictions, myths and misunderstandings. This book should lead to a more realistic debate about our expectations of the monarchy, its role and its future.

You can find the book, The Role of Monarchy in Modern Democracy: Eurpoean Monarchies here.

Read the summary blog about the book here: The role of monarchy in modern democracy.

The editors have also published an article in the Political Quarterly Journal, European Monarchies: The Guardians of Democracy?

Jean Seaton is Professor of Media History and the Official Historian of the BBC. She will publish in the Autumn of 2024 the next volume of the Corporations story, Holding the Line: the BBC and the Nation, taking Lord Asa Briggs work forward for Profile Books. This involves everything the BBC did in a tumultuous decade from the conflict in Northern Ireland, to the invasion of the Falklands, to Not the Nine O'Clock News, the Proms, the early music revolution, devolution, Dennis Potter's greatest plays, Attenborough's revolutionary series Life on Earth, and Radio 1s most influential moment, as well as the role of women in the Corporation, programmes for children and a tense and complicated relationship with the government. The historian was given privileged access to BBC archives, but also gained privileged access to state papers. For the first time the Corporation's history is seen in the round. It has depended on several hundred interviews, and explores both the programme making decision that go into the making of an iconic Television series like John le Carre's Tinker Tailor Soldier Spy, but also the high politics around the imposition of the broadcasting ban.

Recent Posts
Recent Articles
Portfolio
The Battle for Understanding: the pandemic of disinformation, and the role of the BBC
Can Tim Davie save the BBC?
CAMRI | The Monarchy, ‘Popularity’, Legitimacy and the Media - CAMRI
class="pirenko_portfolios-template-default single single-pirenko_portfolios postid-4287 samba_theme samba_left_nav samba_left_align samba_responsive thvers_85 wpb-js-composer js-comp-ver-6.5.0 vc_responsive"