New Book: Rereading Marx in the Age of Digital Capitalism 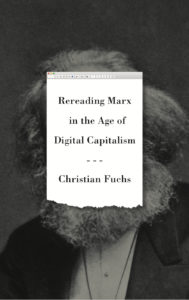 “In order to fight capitalism in the digital age, we must understand Marx!” states Christian Fuchs in his new book, Rereading Marx in the Age of Digital Capitalism, published by Pluto Press.

About the book
The ‘end of history’ has not taken place. Ideological and economic crisis and the status quo of neoliberal capitalism since 2008 demand a renewed engagement with Marx. But if we are to effectively resist capitalism we must truly understand Marx: Marxism today must theorise how communication technologies, media representation and digitalisation have come to define contemporary capitalism. There is an urgent need for critical, Marxian-inspired knowledge as a foundation for changing the world and the way we communicate from digital capitalism towards communicative socialism and digital communism.
Rereading Marx in the Age of Digital Capitalism does exactly this. Delving into Marx’s most influential works, such as Capital, The Grundrisse, Economic and Philosophic Manuscripts, The German Ideology and The Communist Manifesto, Christian Fuchs draws out Marx’s concepts of machinery, technology, communication and ideology, all of which anticipate major themes of the digital age.
A concise and coherent work of Marxist media and communication theory, the book ultimately demonstrates the relevance of Marx to an age of digital and communicative capitalism.

Introduction: Rereading Marx in the Age of Digital Capitalism

The year 2017 marked the 150th anniversary of the publication of Volume 1 of Marx’s Capital and 5 May 2018 marked Karl Marx’s bicentenary. After decades of marginalisation, we today find a repeated interest in Karl Marx’s work. This book asks the questions: Why is Marx relevant today? How can we make sense of Marx in the age of digital and communicative capitalism?To reread something should include that we remember something, re-say and re-voice it, do something again, and struggle for something again. Rereading Marx means remembering Marx’s works, re-voicing and re-saying Marx’s ideas and politics, re-doing his critique, and repeating the struggle against capitalism and for socialism. To re-do something is never a mechanical mapping or reflection, but rather a creative dialectical process of sublation that preserves, eliminates and creates something novel. To reread Marx is not a mapping of Marx, but a creative renewal of Marx’s analysis and radical politics in the twenty-first century.

Taken together, these categories form the foundations of a critical theory of capitalism and of its economic system, political system, cultural system, its technological paradigms, the human/nature relationship within capitalism, and aspects of subject/object, time and space in capitalism. Marx’s approach is inherently critical, which means that it analyses capitalism’s contradictions, its crisis tendencies, struggles and the foundation of alternatives to capitalism as the determinate negation of capitalism. Two hundred years of the development of Marxian theory have resulted in numerous approaches, strands, interpretations, debates and conflicts.

The rise of neoliberal capitalism in society, of postmodernism in culture and academia, and of identity politics has together with the collapse of the Soviet system, the degenerations brought about by various forms of Stalinism, and the neoliberalisation of social democracy resulted in a decline of Marxian-inspired theory and praxis during the past decades. Francis Fukuyama was therefore able to postulate in 1992 that the end of history had arrived and to claim that capitalism and liberal democracy would exist forever. Many academics in the social sciences and humanities to a certain extent have practised Fukuyamaism by forgetting about capitalism and the analysis of society’s totality. They have instead focused on micro-analysis, postmodernism, the attack on ‘grand narratives’ and truth claims, and categories such as globalisation, individualisation, risk, networks, modernity, identity, etc. While Marx has increasingly become absent in theory and praxis, the class contradiction and inequalities have expanded so that he has in light of his absence paradoxically become more needed than ever before.

Twenty-five years later, societies and sociology have changed. The notion of capitalism has in the light of capitalism’s actual crisis made a return into the public and sociological vocabulary. A new world economic crisis emerged in 2008. It turned in many parts of the world into a political, social, austerity, ideological and legitimacy crisis of capitalist society as well as into the rise of new nationalisms and authoritarian forms of capitalism (Fuchs 2018). Marx keeps on haunting capitalism in the twenty-first century. Talking about Marx means talking about class, capitalism, crisis and alternatives to capitalism. It is therefore evident that Marx will remain our contemporary as long as capitalism continues to exist. The time has come to repeat Marx.

Whereas in the 1990s and the first decade of the 2000s, it was difficult to talk about Marx without immediately being confronted with the prejudices against Marx (see Eagleton 2011) so that a discussion about Marx and the critique of capitalism could not even be started, today there is more willingness to listen to what Marxist theory has to say. In the age where neoliberal capitalism is in deep political, economic and ideological crisis and tends to turn into new authoritarian capitalisms, it has not just become evident that the market and the commodity form cannot solve human problems, but also the time has come to once again take Marx and socialism seriously.

Facing economic, political and ideological crises, we have to reread and repeat Marx today. Rereading and repeating Marx does not mean to mechanically apply Marx’s thought to twenty-first-century society. It also does not mean to treat his writings as scriptures, from which one repeats one and the same quotations over and over again.

First, to reread and repeat Marx today means to develop analyses and critiques of class and capitalism in the twenty-first century in a historical and dialectical manner. It means to study how capitalism not just as economic formation, but as societal formation is transforming and damaging human lives, society and nature. It means repeating Marx’s categories – such as the commodity, labour, value, surplus-value class, exploitation, capital, exploitation, domination, ideology, class struggles, means/relations/modes of production, means of communication, the general intellect, communism, etc. – in the twenty-first century. Marx was both a historical and a dialectical thinker. To repeat Marx in the twenty-first century, therefore, neither means to abolish his approach, theory and politics, nor to completely re-invent them, nor to leave them unchanged. That capitalism is a historical and dialectical system means that it changes through crises in order to remain the same system of exploitation. To reread and repeat Marx therefore means to sublate Marx’s categories based on a dialectic of continuity and change. Whereas postmodernists have preached for decades that society has completely changed, orthodox social theorists claim that nothing at all has changed. Postmodernism is almost dead and overestimates change. The orthodoxy that nothing ever changes in contrast overestimates continuity.

Second, the contemporary capitalist age is profoundly ideological. To understand and change society, we therefore need to reread and repeat Marx’s ideology critique. Through consumer culture and neoliberalism, we have experienced the commodification of (almost) everything and the constant presence of ideologies that justify commodity logic in all realms of everyday life. Commodity fetishism as ideology immanent to capital itself has thereby become universal. Rising inequalities have resulted in the intensification and extension of ideologies that distract attention from capitalist society as the underlying cause of social problems. The most evident form of political fetishism has in recent times been the rise of new political nationalisms.

Third, to reread and repeat Marx today means to envision and struggle for alternatives to capitalism. Marx stresses that history is not pre-determined and that humans make their own history. Even in dark times, it is never too late. And it is especially in such times important to envision alternatives and think of and work towards ways of how the gap between what could be and what is can be overcome. Capitalism is not the end of history. In order to humanise society, fundamental societal change is needed.

This book rereads and repeats Marx in the age of digital and communicative capitalism in six steps. Each step is organised as one chapter. To repeat Marx means to reread and reinterpret his major works today. Chapter 2 – ‘Rereading Marx’s Capital in the Information Age’ – presents foundations of repeating Marx by reading Capital in the information age. Repeating Marx requires that we reconstruct the history of his theory and concepts. Chapters 3 and 4 repeat Marx by reconstructing his concepts of technology/machinery (Chapter 3: ‘Rereading Marx as Critical Sociologist of Technology’) as well as communication (Chapter 4: ‘Rereading Karl Marx as Critical Theorist of Communication’). Rereading and repeating Marx also means to update, develop and apply his approach to contemporary phenomena. Chapter 5 – ‘Rereading Marxian Analysis in the Age of Digital Capitalism: The Case of Industry 4.0 and the Industrial Internet as the Digital German Ideology’ – rereads and repeats Marx by updating his critique in the age of digital capitalism as the critique of the concept of industry 4.0/the industrial Internet.

Rereading and repeating Marx also means to repeat and remake socialist praxis, that is, emancipatory politics that aim at the establishment of a participatory society of the commons. Chapter 6 – Rereading Marxian Analysis in the Age of Digital Capitalism: Reflections on Michael Hardt and Antonio Negri’s Book Assembly – reflects on repeating Marx’s socialist praxis via an engagement with Michael Hardt and Toni Negri’s book Assembly that aims at inspiring contemporary political struggles. Chapter 7 provides some concluding thoughts.