When the President Divorced His Wife and Married the Country Instead

When the Russian president divorced his wife in 2013, social media crowds coined plenty of the Internet memes to interpret the news. Anastasia Denisova, Doctoral Researcher at CAMRI, examined the framing of the story in traditional and new media and came to the surprising findings.

Vladimir Putin’s divorce announcement was an intriguing amalgamation of the Soviet-style television journalism and an act of self-exposure by a charismatic contemporary leader.  In June 2013, the state news channel Vesti-24 sent a journalist to cover Vladimir and Lyudmila Putin’s visit to a ballet production, Esmeralda, at the state Kremlin theatre. The reporter suddenly asked: “You and Lyudmila are rarely seen together in public. Rumour has it that you do not live together. It is true?” The first couple responded that, indeed, they were getting a divorce as the children had grown old enough, yet they would stay friends and wish each other the best of luck. The whole interview lasted 3:25 minutes and became a big surprise for the country.

I have applied classic studies of mediated political persona (Braudy, 1986; Meyrowitz, 1985; Corner, 2003; Goffman, 1995) to examine framing and presentation of Putin’s divorce story. Politicians are not equal to entertainers who stay in the spotlight (Goffman, 1995) as politicians have to conform to a set of ideals, projections, social stereotypes and cultural/national archetypes for their audience of voters (Corner, 2003).

Putin’s divorce announcement contained many archetypes and symbols, which linked his personal life with the political past and present of the country. First, although living in the era of digital media, Vladimir Putin chose to broadcast his personal news through a traditional television channel. Second, it was featured in a news bulletin, which made the breaking news of the president’s divorce, paradoxically, quite a mundane news event. Third, the semiotic construction of the divorce announcement bore a lot of connotations and synergies to the conservative, Soviet-style information distribution patterns. There are a few key symbols here that evoke collective memories: ballet, conservative political report on the government, and the stereotype of a patriarchal couple with a submissive wife (see Loshak, 2014; Rostovskiy, 2014). Vladimir and Lyudmila Putin wear a classic monochrome suit and costume with a skirt respectively. They pose in front of the golden decorations of the Kremlin Theatre Hall, the walls themselves reflecting the glory and fanfare of the Soviet leadership and architecture.

Then, since the perestroika of the 1990s, ballet has been widely perceived as a symbol of big political change and cause of public anxiety (Holden, 2011): this connotation was born in the 1990s when all channels were broadcasting Swan Lake round the clock while the White House was under attack. In the public consciousness, a ballet broadcast is symbolic of a political crisis or turmoil. 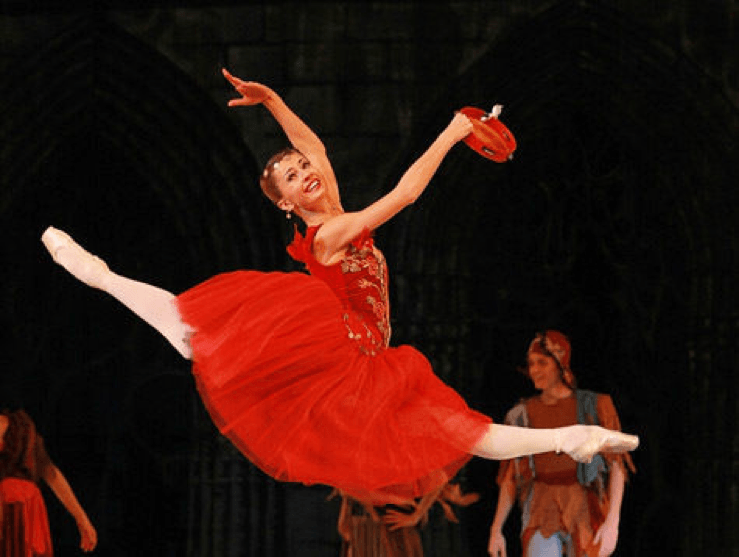 In the first 24 hours after the divorce announcement, Russian Twitter generated 180,000 tweets on the topic. Many users created Internet memes, “condensed images that stimulate visual, verbal, musical, or behavioral associations that people can easily imitate and transmit to others” (Pickerel et al., 2002), to express their view on the divorce story.

Qualitative analysis of the most popular tweets revealed several strong themes round Putin’s divorce discussion. Many meme makers pointed to the relationship between Vladimir Putin and Prime Minister Dmitry Medvedev as the possible cause for the divorce. For instance, “He should have tied up his relationship with Dmitry Anatolyevich long ago” or “So actually Medvedev is the case?”. Another strand of memes implied that, according to the Russian legislation, Putin’s ex-wife should get half of their wealth, in this case—half of the country. Yet one more way to interpret the divorce was linking it to the Russian international politics. One user wrote “Take Yanukovich to the ballet” implying that Ukrainian president Viktor Yanukovich (who was still a legitimate president in June 2013) should also be taken to the ballet to trigger changes in the political life in Ukraine. 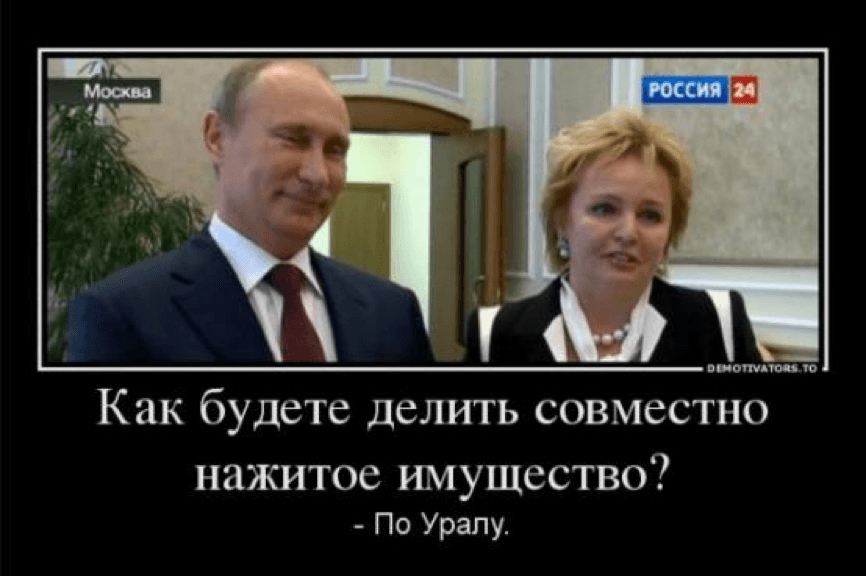 “How are you going to share the marital property? – Across the Ural mountain.”
Source: http://www.madamam.ru/blog/shutki-po-povodu-razvoda-putina

A famous Russian journalist Dmitry Olshansky used his Twitter account to draw a historical parallel between Putin and other Russian and Soviet political leaders. He noted that those leaders of the past who were known to be good husbands were not successful managers of the state. In contrast, lone rulers of Russia, such as Joseph Stalin, had the reputation of the more devoted rulers who loved their country first and gained a lot of support for this from their electorate.

Vladimir Putin’s 2013 divorce announcement presented new challenges for his personal and political self-representation. Despite the reputation of social networks as hubs of unpredicted, sometimes resistant, sometimes purely mean, communication, the majority of tweets showed a certain level of respect towards the leader’s private life. The memes on Putin’s divorce featured much humour, but rarely it was aggressive or offensive. Quite a few of these viral jokes speculated on the idea that Vladimir Putin should have divorced the country instead. 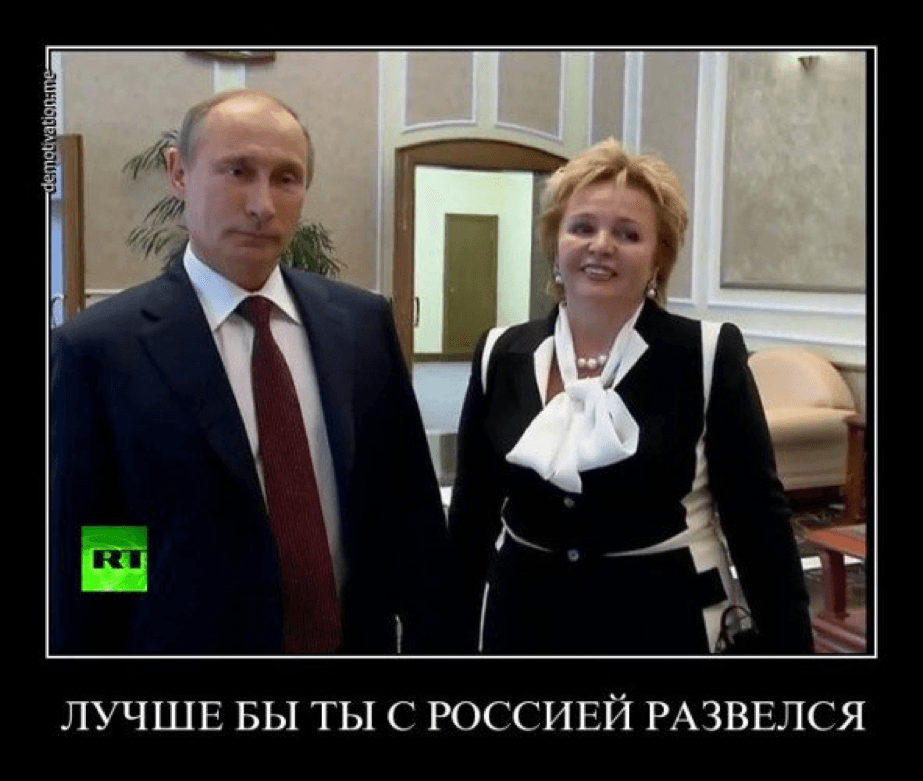 “You should have divorced Russia instead”
Source: http://xaxa-net.ru/prikol_pics/762-putin-razvelsya-prikolnye-kartinki-pro-razvod.htmlv

Intriguingly, very few users discussed that in Russia, which is a traditional society with the majority of population being female middle-age women, a divorce could be frowned upon. Apparently, it is not an issue for the public perception of Putin. The majority of social media users detached the divorce announcement from the discourse on traditional family values. Instead, they promoted the myth of a lone leader, or a lone warrior, who sacrifices much for the prosperity of his country. This idea, which balances on the edge of private and public, suggests how personified Putin’s politics has become. Internet memes are exceptionally useful in the way they reflect public opinion and trending topics. This study suggests that many social media users see Putin as the embodiment of the Russian politics. They are rather reluctant to discuss his private matters in detail and prefer celebrating his charisma of a strong national leader.

This blogpost is based on the article: