In a few short years, social movements in Cajamarca, Colombia, were able to convince a once divided community to near-unanimously reject establishment of the world’s largest gold mine on their doorstep. Doug Specht examines the role of social media and contestatory cartography in achieving this remarkable result.

Colombia’s liberalisation of the mining sector and recent stability have brought a “gold rush” of large mining multi-nationals seeking to exploit the country’s significant reserves, which include twelve of the world’s largest gold deposits. Amongst them was the South African giant AngloGold Ashanti (AGA), which began local prospecting in the early 2000s. Their finds included a rich seam of gold running through the Tolima region and directly under the town of Cajamarca, but at the time it was considered inaccessible due to ongoing security risks. Since 2009, however, the company has redoubled its efforts, spending millions to promote the benefits of the mine (La Colosa) and stimulate the mining sector in the region.

In 2013, with low inflation and Colombia’s economy growing at 4.2 per cent, Cajamarca’s residents were split down the middle over the costs and benefits of the proposed mine. But in the March 2017 referendum a remarkable 98 per cent of residents rejected AngloGold Ashanti’s attempt to turn the town into the world’s largest gold mine. Though the company is likely to pursue a legal challenge, it may well be thwarted by laws on collective rights. So how did local social-movement organisations (SMOs) achieve this shift in a context of subsistence farming and severe poverty where the appeal of jobs and prosperity could easily outweigh concerns about the environment?

My own research (with Mirjam AF Ros-Tonen) in Cajamarca and Ibagué has uncovered a key but little-noted driver: the use of digital tools such as social media and geographical information systems (GIS) for participatory mapping. Both have been made possible by rocketing rates of smartphone use in Colombia, whereas Tolima’s rugged landscape and unforgiving climate make tools for remote communication and coordination especially valuable. 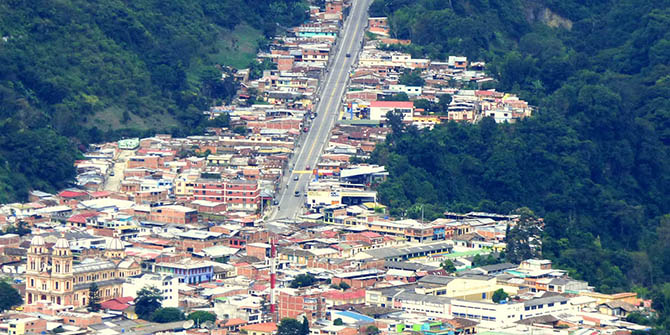 Social media and protest in Colombia

Research into social media and protest movements abounds, with technology’s role seen sometimes as (literally) revolutionary, sometimes as conducive to a hollow “slacktivism”. But one common theme is the multiplicity of voices, open discussion, and horizontal leadership of SMOs and protests.  Cajamarca did not fit the mould.

SMOs in the region had varying degrees of engagement with social media: from none whatsoever to massive international followings and extensive mailing lists. Most of those involved in SMOs had smartphones and access to social media, as well as knowledge of their potential, limitations, and possible uses. However, none of the SMOs we researched used social media in the non-hierarchical manor that scholars have often observed.  In the campaign against AngloGold Ashanti, accounts were carefully controlled, comments were closely moderated, and messages were kept consciously clear, consistent, and constant. SMOs did not want to lose credibility through sharing of inaccurate, inflammatory, or emotionally-charged material.

The negative aspect of this was that those with higher socioeconomic status – generally wealthier, male members of the SMOs – were given the right to post.  Their defence was that this was not about consolidation of power, only consistency of message.  Given the effectiveness of their campaign in Cajamarca, this somewhat problematic trade-off may have been worthwhile.

Maps and protest in Colombia

Activists in Tolima also made maps a significant part of the legal campaign against AngloGold Ashanti. Combining ideas of participatory geographic information systems (PGIS) with the spread GPS technology via smartphones, communities were able to produce “counter knowledge” that redrew the boundaries of power in their favour.

We found that the community had already invested a great deal of time and resources in developing maps to show where the mining project had overstepped its boundaries even during prospecting. These maps also revealed significant issues relating to watersheds and rivers which had not been properly addressed by AngloGold Ashanti in their Corporate Social Responsibility documentation. Despite having to struggle to have their work recognised in court, it was ultimately admitted and continues to be hugely important factor in the legal fight. 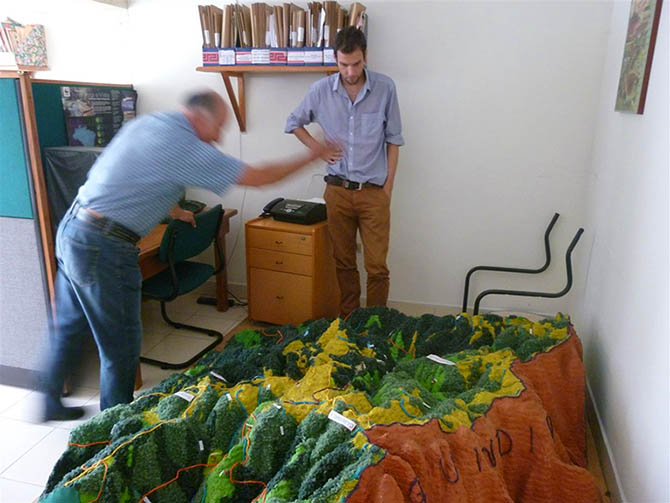 SMOs also constructed a large 3D model of the entire region: if people didn’t know the landscape under threat, then why would they be interested in saving it? SMOs did try to take people in person, but this was costly, time-consuming, and limited in its reach. The model, meanwhile, could be transported to community meetings, schools and companies to help people realise the extraordinary scale of the mine, the associated environmental damage, and the potential effects on livelihoods.

As with use of social media, SMO involvement in participatory mapping was limited mainly to men, though there was much interest in widening participation. In fact, this part of the research developed into a standalone participatory mapping platform (Voz), which is now being used by communities in Colombia, El Salvador, Honduras, and beyond to map human-rights and environmental abuses related to mining and other heavy industries.

During our fieldwork, the community of Cajamarca was bitterly divided over the desirability and impact of AngloAshanti’s La Colosa project. Tensions were high on all sides, including the government’s. The situation boiled over on a number of occasions, most tragically with the killing of Pedro César García Moreno, a member of SMO Conciencia Campesina who was shot and killed in November, 2013. The military were also regularly deployed to the town, complete with armoured vehicles, rocket launchers, and riot-squad support. In a few short years the situation has changed beyond recognition.  SMOs have managed to bring about a massive shift in the attitudes of the local population and have recently scored a bold and important victory. Social media and contestatory cartography are but two of the many tools that SMOs have used to galvanise the population of Cajamarca, but they represent a creative use of technology that can and should be noted by scholars and activists the world over.

Notes:
• The views expressed here are of the authors and do not reflect the position of the Centre or of the LSE
• This article draws on the author’s article (with Mirjam AF Ros-Tonen) “Gold, power, protest: Digital and social media and protests against large-scale mining projects in Colombia” (New Media and Society, 2016)
• Featured-image credit: crop of Daniel Gutierrez, CC BY-SA 4.0
• Please read our Comments Policy before commenting