An Opinion Piece by Steven Barnett and Doug Specht, published by The Conversation

As Black Lives Matter protests swept through parts of Britain after the killing of George Floyd in the US, a self-described Conservative student, James Yucel, became so disillusioned with what he interpreted as left-wing bias at the BBC that he established a campaign that he christened “Defund the BBC”. The Twitter handle, @DefundBBC, was presumably in ironic homage to the BLM campaign to #DefundThePolice.

As just a “student in his room”, on the evening of Sunday June 7, he invited fellow anti-BBC sympathisers to “share the hashtag … because, let’s be honest, they can’t ignore us forever”.

With Dominic Cummings, the prime minister’s chief adviser – known to be a longstanding BBC critic – and the government having quickly launched a consultation on decriminalising non-payment of the licence fee, both the BBC itself and its funding model were already under attack. A campaign that urges viewers to (legally) cancel their licence payments might therefore expect to find sympathy in Downing Street.

Yucel’s call to arms – supposedly a spontaneous grassroots expression of anger directed towards “anti-government” coverage of the London protests – is an object lesson in how activists both create and inflate a campaign in which “ordinary people” appear to share their own political agenda. A Twitter analysis of what happened next – and how the flames were fanned by mainstream media with their own anti-BBC agenda – is very instructive.

Late on that Sunday evening a deluge of tweets began to appear using the hashtag. One of the first was from @willowwyse – apparently an anti-vaccination activist – who, like many of the tweets that followed, tagged high-profile Brexit supporters and anti-BBC campaigners. As most of the country slept, the campaign quietly amassed followers: by around 8am on Monday morning more than 20,000 accounts were following @DefundBBC and its hashtag was trending.

Almost all of these early followers appeared to be very small accounts – more than two-thirds of them had fewer than 50 followers, a metric used to assess the likelihood of an account being a bot or part of a click farm. The early hours of a Monday morning are, to put it mildly, a strange time for an enraged nation to be mobilised into action.

So who were the prime movers in this allegedly grassroots campaign? The first diagram below – which shows by volume who included @defundBBC or retweeted @defundBBC in their posts – reveals that by far the biggest fan was an anonymous account by the name of @PollyIce2 who tagged the campaign nearly 150 times. 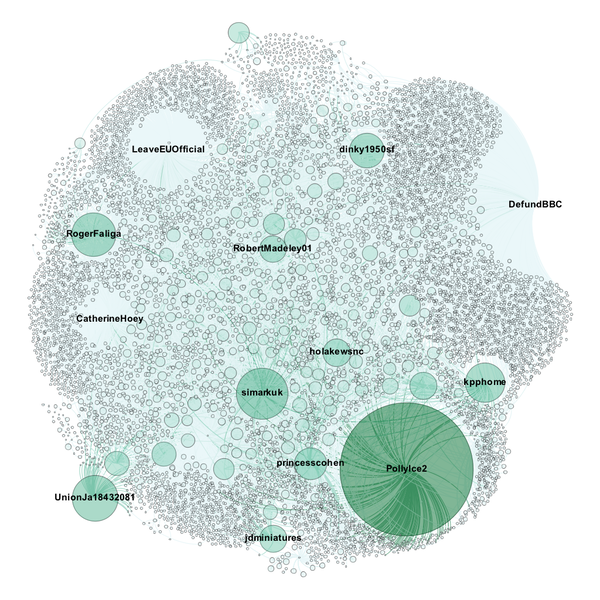 Among the retweets from this account are also several in support of former EDF leader Tommy Robinson and one picturing Enoch Powell under the title: “Enoch Powell was right!” Another retweet contained a silhouette of a retreating Churchill with the words “without Churchill … Hitler would have won! BAME people would have been next for the shower!” The retweeted account had written above the picture: “Why did we bother”.

Another account, @UnionJa18432081, featuring the British flag but apparently keener on tweeting support for Donald Trump, was also heavily engaged in the early hours. This account had just eight followers and appears to have been set up in May 2020. Another, under the name of @jamie_sense, who retweeted the hashtag more than 60 times, included on his timeline a retweet of someone stating that: “African gangs of violent young men are terrorising our communities with impunity.”

These small accounts also appeared coordinated in their approach. While strong ties to the DefundBBC account would be expected, they also systematically tagged the Twitter accounts of the official Leave campaign (@LeaveEUOfficial) and the former Labour MP and arch-Brexiteer Kate Hoey (@CatherineHoey) in order to draw these high-profile accounts into retweeting their support.

The second diagram shows how accounts supportive of #DefundtheBBC are related to each other. On average each account only “knows” (follows or is followed by) 1.6 other accounts within the network. Around 80 small clusters of accounts were detected, but most accounts “know” one of three main high-profile accounts. Apart from the @DefundBBC account itself, these were the actor Laurence Fox, who has become a standard bearer for the right – and whose controversial remarks on television helped him to gain 187,000 followers on Twitter. Another was Mahyar Tousi (39,000 followers), who has stood in local elections as a Conservative candidate and who describes himself as a “classical liberal conservative YouTuber”, “Free Trade Brexiteer” and “Free Market Fundamentalist”.

The vast majority of campaign followers, judging by their Twitter history, were committed Brexiteers and followers of the Leave campaign, which itself has a long history of hostility towards the BBC. 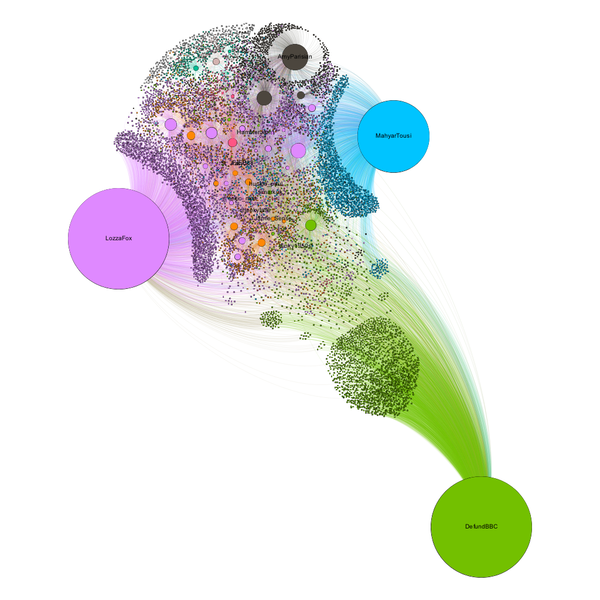 How accounts supporting the campaign relate to each other. Steven Barnett/Doug Specht, University of Westminster, Author provided (No reuse)

No anti-BBC campaign would be complete without certain national newspapers – with a commercial self-interest in trying to undermine a freely available and trustworthy news source – piling in to celebrate a “grassroots uprising”. The Daily Express was first into the fray with a typically overblown headline: “BBC crisis: 30,000 sign up to Twitter campaign to ‘DEFUND THE BBC’ – ‘It’s time!’”

Rupert Murdoch’s Sun immediately joined the kicking party – executive editor Dan Wootton was quick to express his amazement at the “huge momentum” gained by the campaign, and to give Yucel time on his drivetime show on TalkRadio (also owned by Murdoch) to promote his non-payment campaign.

Defund The BBC’s James Yucel: “The BBC will regularly introduce guests without their political background, we’ve had many occasions where a doctor or teacher have been on Newsnight and the BBC has failed to report they are Labour or Momentum activists”.@danwootton | @DefundBBC pic.twitter.com/hWhaylDfId

From the very beginning, the campaign wanted to look like a spontaneous eruption of popular anger. In practice, it looks like a suspiciously coordinated operation, linking together several pro-Brexit, free-market (and in a few cases far-right) social media accounts.

Any politician tempted to take this at face value should ask themselves, to what extent is this another confected campaign in a long-running culture war against the BBC? And does it really reflect the massive increase in consumption of BBC programming during the lockdown?

Much better to rely on representative surveys from reliable, impartial sources which continue to show the BBC as one of the most trusted sources of information.