A Press Article by Christian Fuchs, published by Huffington Post

Google and Facebook control about two thirds of the revenues in the online advertising market. Their duopoly poses problems for the continued existence and funding of journalism

In his lecture at Edinburgh TV festival, Jeremy Corbyn called for taxing the digital tech giants in order to create a digital licence fee that helps funding the BBC and new digital BBC services. The University of Westminster’s Communication and Media Research Institute just published the two policy reports “The Online Advertising Tax as the Foundation of a Public Service Internet” and “The Online Advertising Tax: A Digital Policy Innovation” that deepen the engagement with this speech’s implications. They outline a viable model for how exactly online advertising can be taxed in order to enable the creation of a public service Internet.

Google and Facebook control about two thirds of the revenues in the online advertising market. Their duopoly poses problems for the continued existence and funding of journalism and a vivid public sphere. The two Californian tech giants have also come under scrutiny for avoiding to pay taxes by globally outsourcing and distributing their revenues with the help of a strategy known under the name of the “Double Irish with a Dutch Sandwich”. The digital giants typically argue that their economic value is not created in a national jurisdiction, but by algorithms on the placeless Internet. But only humans can create economic value. Without human activities, technologies such as the Internet are meaningless and “dead”. Google and Facebook’s users create the value with which these companies operate and which they sell as Big Data to advertising clients. These advertisers pay for targeting personal ads at users of Facebook and Google. The phenomenon that Google and Facebook exploit users’ generation of data is known as digital labour. Online advertising is far from placeless: Whenever we view or click on an ad, we are in a particular physical location that is part of a certain nation-state. Both Google and Facebook personalise advertising according to place, that is, for every placement of personalised advertising a user sees, that user’s location is identified and stored. Google and Facebook should pay for sold online advertisements in the country where these advertisements were personalised.

The sale of the online advertisement as a commodity takes place when it is viewed (“pay-per-view” advertising) or clicked upon (“pay-per-click” advertising). The theory of digital labour shows that it is the users who create the value of the online advertisement and that online advertising should be taxed in the country where the users at whom it is targeted are. If I happen for example to be physically in the UK when clicking on the ad, then British tax law should apply. The users’ physical location is the where the service, digital labour and value-generation is performed and where it should be taxed. 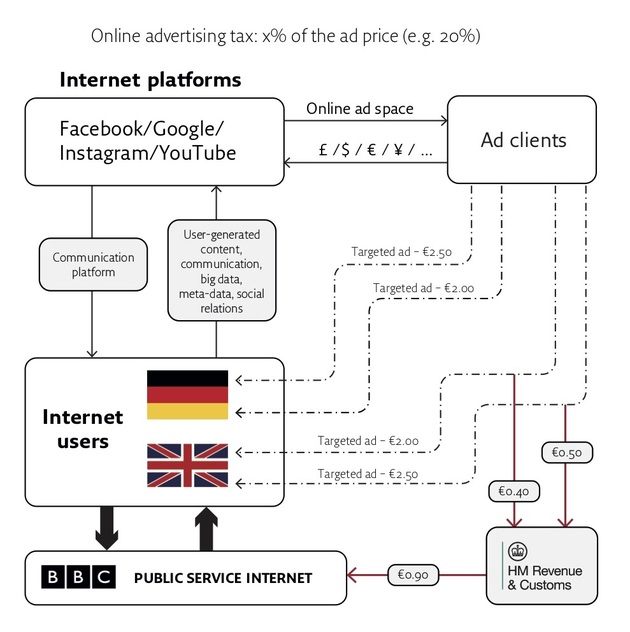 The IP address identifies the computer network from which the user is connecting to the Internet. IP addresses are allocated to the country of the Internet service provider. When visiting an Internet platform, it is standard procedure for the IP address to be retrieved and stored. This enables advertising to be personalised according to countries and places. Accordingly, the IP addresses from which platforms are accessed are standard data retrieved and stored by the platforms.

The suggested model could be implemented in such a way that in the UK (or in other countries), companies such as Google or Facebook would be required to statistically analyse what proportion of payment-generating advertising clicks or impressions were executed in Britain (or in whichever country is charging the online advertising tax). The corresponding national share of the global profit, global value creation and global turnover per year could then be used as the financial basis for calculating the payable annual online advertising tax. Another option would be to calculate profit, value creation and turnover according to the country’s share of global active users as the financial basis for taxation; however, this would produce only a rough estimate.

Towards a Public Service Internet

There is a range of conceivable public service Internet platforms whose creation could be financed through an online advertising tax. In the UK, one possibility would be to create a public service emulating YouTube (BBCTube, say), on which all of the BBC’s legally available archive of programmes could be made available to users for reuse with creative commons licences. When the institutional basis for a public service Internet platform is built through a sound funding model with the help of the digital advertising tax, the platform also provides the space for innovative and alternative approaches to different kinds of media content (such as the online debate format Club 2.0) that could enliven political debate and communication in the public sphere.