Public broadcasting: does the UK’s regulator have the public interest at heart?

An Opinion Piece by Steven Barnett, published by The Conversation

The government is finalising its choice for the vacant position of chair of the UK’s broadcasting and telecoms regulator, Ofcom. It’s potentially a contentious issue as, according to well-informed government leaks, former Daily Mail editor Paul Dacre is in pole position for the job which – while notionally subject to an “independent” appointments process – is effectively in the prime minister’s “gift”.

There are many reasons why Dacre is arguably unsuitable for the job. Not least of those is his much-vaunted visceral hatred of the BBC (which Ofcom now regulates) and his lack of any relevant technical knowledge in the telecoms sector (he famously does not use a computer). But regardless of who becomes the next Ofcom chair, there is a broader issue which needs addressing: whether the regulator is still genuinely committed to promoting the interests of citizens.

Ofcom’s birth in 2003 was preceded by a major parliamentary battle to ensure that citizens were at the heart of its regulatory obligations. In the teeth of furious opposition by Tony Blair’s Labour government, the House of Lords – led by Labour peer David Puttnam – forced through an amendment that secured Ofcom’s duty “to further the interests of citizens” as well as consumers. For the past 18 years, that duty has been fundamental to Ofcom’s central role in promoting the democratic and cultural benefits of broadcasting.

Who does Ofcom represent?

Is Ofcom still committed to supporting the broader public interest? Recent evidence – especially since taking full regulatory powers over the BBC in 2017 – is not encouraging. First, there was the long delay in allowing the BBC more flexibility in its iPlayer, to enable it to compete with increasing audience demand for box sets and longer viewing windows. Ofcom’s insistence that the BBC should conduct a public interest test was not the approach of a regulator prioritising the interests of citizens who are collectively paying for a universal public service trying to compete with American streaming services.

Nor was it helpful that the process, from Ofcom’s intervention in November 2018 until its final determination in August 2019, took nine months in a world of rapidly changing audience consumption habits. In the words of then BBC chairman, Sir David Clementi, it was an approach that ran the risk of “tying ourselves up in red tape and regulation at a time when media organisations need to be fast and agile”.

Then there was the strange case of how Ofcom chose to report viewer responses to its questions on impartiality. A two-page section in its most recent annual report on the BBC was headed: “Audiences continue to rate the BBC lower on impartiality.” This conclusion predictably featured prominently in negative coverage by a highly partisan anti-BBC press. 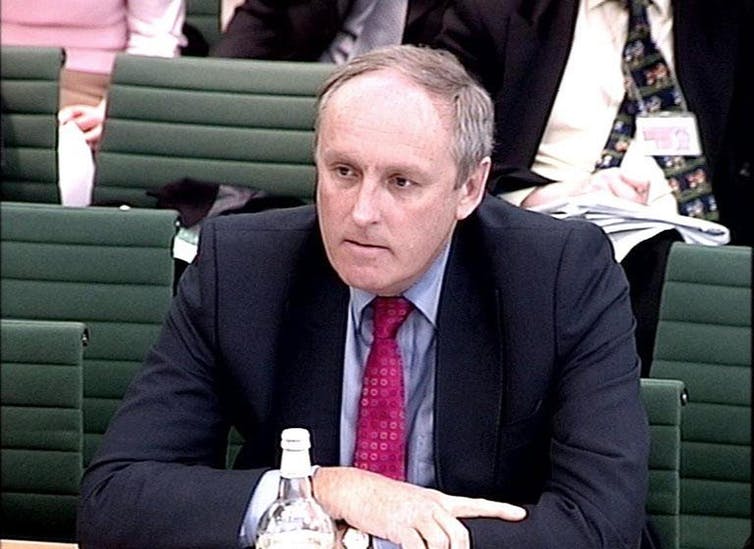 Paul Dacre, editor-in-chief of DMG Media, which publishes the Daily Mail, is a longstanding critic of the BBC. PAImages/Alamy Stock Photo

But the figures on which Ofcom based this high-profile conclusion were highly dubious. They were taken from Ofcom’s 2020 News Consumption report which looked at how audiences rated seven TV providers on nine separate news attributes, including impartiality. Ofcom calculated these figures only on the basis of “regular users” of each service, which effectively distorted the data.

On every single attribute, CNN (222 regular viewers in the Ofcom sample) emerged as top. Meanwhile, on impartiality, al-Jazeera (153 regular viewers) was second only to CNN, with 69%. The equivalent BBC figure was 58% – but on a sample size of 2,754 because BBC news is the default choice for most TV viewers and commands huge audiences. At the very least, such figures have to be treated with caution. We can be pretty sure that even regular viewers of, say, Fox News would rate it very highly for impartiality.

Ofcom did not acknowledge the vast differences in base sizes for their data, nor did it make any mention of either CNN or al-Jazeera as the highest rated channels for impartiality. A rather more nuanced – and citizen-based – approach might have reported on a 2020 Ipsos-Mori survey which was carried out at almost exactly the same time. When a representative sample of all adults was asked, “Which ONE source are you most likely to turn to if you want impartial news coverage?”, 51% responded BBC. The next highest, with just 7%, was Sky News.

A focus on content inevitably leads to debates about subsidising less popular programming such as arts, documentaries and minority sports rather than focusing on the values that institutions like the BBC, Channel 4 and even ITV and Channel Five bring to original UK content across the board.

Ofcom’s consultation document refers variously to “how PSM is made” and “PSM content”, both of which are rooted in consumerist arguments about filling in “market gaps” that the private sector cannot fulfil. Public service broadcasting is founded on citizen-based values of range, quality, universality, impartiality, innovation and wide geographic appeal, that are rooted in institutions not content. It is not at all clear that Ofcom understands or accepts that distinction.

Since its inauguration in 2003, Ofcom has played a central role in promoting the UK’s democratic and cultural welfare. But this appears to be changing. These are disturbing signs that its decision-making and internal culture are becoming increasingly dominated by an economics-driven and consumerist philosophy at odds with its duty to citizens. This is why the choice of a new chair is vitally important.