The BBC and the Blob. The very local and the very global. 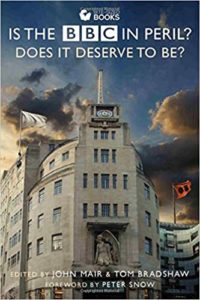 Prof. Jean Seaton writes on the BBC and the Blob for a new book about the BBC. Is the BBC in Peril?: Does It Deserve to Be? is a Bite-Sized Public Affairs Book, edited by by John Mair and Tom Bradshaw. The book, which is timely by design, takes its cue from the December 2019 General Election, when it became clear that the Boris Johnson Government and the Prime Minister’s chief adviser, Dominic Cummings, have the BBC in their crosshairs. While “crisis” is a word that is frequently used in connection with the corporation, it is not exaggerating to say that this one is very serious; existential, even. This book covers the full spectrum of views on the corporation. Within its pages there are the perspectives of BBC lifers, BBC bashers and BBC true believers. Leading television executives, media academics, prominent journalists of varying stripes, economists and politicians all have their say.

Seaton’s contribution suggests that the BBC should not be complacent that it is indispensable because of its coverage of the Covid pandemic, and that its new director general Tim Davie should promote its unique local and global strengths in fighting attempts to cut it down to size.

We have reproduced the opening paragraphs of Seaton’s chapter below, the full text can be read in Is the BBC in Peril?: Does it Deserve to be? which is out now.

The BBC and the Blob. The very local and the very global.

The BBC is having a good war, the Government a less good one.  In normal times this  success would be expected to ease Tim Davie’s load, give him political capital, and wriggle room. He faces many challenges – to secure BBC editorial independence which depends on a secure financial future, and create technological innovation so that the BBC is on every viewing platform, in the face of competition from the biggest corporations in history. He has to spearhead the BBC as the most important instrument in a world-wide battle for enlightenment values, in the face of a shift in world power accelerated by the pandemic. Davie is a contained and decent man: he understands business, feels the vocation of the BBC, was chosen unanimously and has the authority to deal for the BBC on new terms.

However, the idea that doing well during Covid has changed the terms of the struggle assumes that this is a government that has been through a Pauline conversion. Post-Covid politics grimly looks just like the politics before. And that is acutely dangerous for the BBC.

The BBC has found a new strength of purpose and unusual coherence for a bitchy organisation which has lived with devastating continuous cuts, spiteful sniping and  unrelenting political pressure for years. The Corporation has been on the rack with the anguish and puzzle of addressing a divided nation split down new lines. Until recently it had no effective opposition to hide behind. Tony Hall made many right choices calling on the best of the BBC and it delivered: from VE Day when the BBC and Her Majesty were not sentimental but both tongue-in-cheek and profoundly serious, to Bite Size, a speedy educational invention, to Normal People and brilliant drama on radio, to More Or Less chasing policy numbers with mild good manners and fangs. It has retained foreign reporting lost from so much of the media landscape. It has got things wrong – sentiment rather than steel in much Covid reporting, no attempt to find new reporters for Covid, so in some way putting the pandemic in the same frame as Brexit.