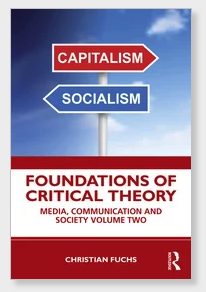 Written for a broad audience of students and scholars, this book is an essential guide for readers who are interested in how to think critically from perspectives such as media and communication studies, sociology, philosophy, political economy, and political science.

“Encyclopedic in nature, authoritative, and up to date, Foundations of Critical Theory is a seminal text on critical theory. Covering everyone from Adorno to Žižek, Fuchs focuses upon the humanistic aspects of Marxist theory and the works of modern and contemporary critical theorists. A monumental achievement and an essential book for anyone interested in critical theory.” – Prof Arthur Asa Berger, San Francisco State University

“The global pandemic has revealed in stark contrast the flaws and failures of neoliberal capitalism. Through a careful revisiting of key elements of and debates in critical theory, Christian Fuchs provides readers with a roadmap for understanding how this approach can inform our search for a more humanist and socialist post-pandemic future.” – Prof David Fasenfest, Editor of the journal Critical Sociology

2. What is Critical Theory?

4. Marx’s Centenary (1918) in the Light of the Media and Socialist Thought.

5. Reflections on Sven-Eric Liedman’s Marx-Biography A World to Win: The Life and Works of Karl Marx

6. Universal Alienation, Formal and Real Subsumption of Society Under Capital, Ongoing Primitive Accumulation by Dispossession: Reflections on the Marx@200-Debate Between David Harvey and Michael Hardt/Toni Negri

7. Critical Social Theory and Sustainable Development: The Role of Class, Capitalism, and Domination in a Dialectical Analysis of Un/Sustainability

8. The Relevance of C.L.R. James’s Dialectical, Marxist-Humanist Philosophy in the Age of Donald Trump, Black Lives Matter, and Digital Capitalism