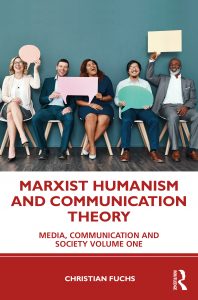 This book outlines and contributes to the foundations of Marxist-humanist communication theory. It analyses the role of communication in capitalist society.

Engaging with the works of critical thinkers such as Erich Fromm, E. P. Thompson, Raymond Williams, Henri Lefebvre, Georg Lukács, Lucien Goldmann, Günther Anders, Jean-Paul Sartre, M. N. Roy, Angela Davis, C. L. R. James, Rosa Luxemburg, Eve Mitchell, and Cedric J. Robinson, the book provides readings of works that inform our understanding of how to critically theorise communication in society. The topics covered include the relationship of capitalism, racism, and patriarchy; communication and alienation; the base/superstructure-problem; the question of how one should best define communication; the political economy of communication; ideology critique; the connection of communication and struggles for alternatives.

Written for a broad audience of students and scholars interested in contemporary critical theory, this book will be useful for courses in media and communication studies, cultural studies, Internet research, sociology, philosophy, political science, and economics.

This is the first of five Media, Communication and Society volumes, each one outlining a particular aspect of the foundations of a critical theory of communication in society.

“In this volume, Christian Fuchs collected and partly updated his recently published articles analysing some key twentieth-century critical/Marxist contributions to the media and communication theory. His work makes an unparalleled contribution to the critical literature of communication studies by analysing, from a Marxist perspective, different dimensions and diverse contexts of mass communication, such as the base-superstructure relationship, human alienation, ideology, hegemony, and its reproductive power for capitalism and its contemporary forms and manifestations, such as authoritarianism, fascism, nationalism, and digital capitalism. A must-read for every critical scholar in the field” — Slavko Splichal, University of Ljubljana

Routledge (for a 20% discount enter either SMA03 or FLY21 into the field “Promo Code”), Amazon UK, Amazon.com, Amazon DE

Request a review copy (you need to provide information on where the review will be published, so should have a commitment by a journal or other publication)