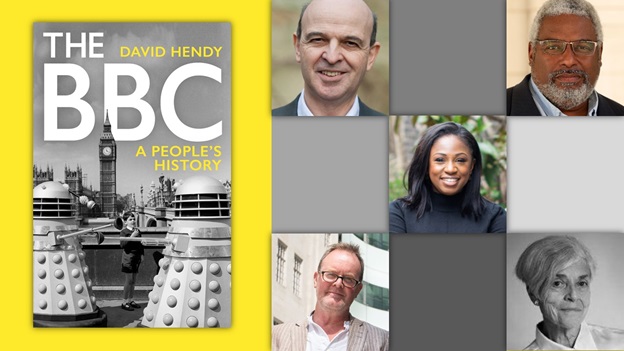 On Thursday 23rd June, Prof. Jean Seaton joined the the British Library and a panel of distinguished guests to take a critical look at the BBC on its 100th birthday.

The event, which took place online, examined how the BBC has evolved, developing from one radio station, to television, then multiple channels and how it now contents with the internet and streaming services. Seaton, who is the BBCs official historian was joined by;

Genelle Aldred worked for over 13 years in media including ITN, ITV and the BBC. Her book Communicate for Change: Creating Justice in a World of Bias was published autumn 2021. Genelle is Deputy Chair of Women in Journalism

Mark Damazer is Chair of the Booker Prize Foundation. Previously he worked at the BBC for over 25 years before becoming Controller of Radio 4 in 2004. From 2015 – 17 he was a BBC Trustee (then the BBC’s governing body).

David Hendy is Emeritus Professor of Media and Cultural History at the University of Sussex. His books include The BBC: A People’s History; NOISE: A Human History of Sound and Listening, and Life on Air: A History of Radio Four, which was nominated for the Orwell Prize.

Patrick Younge is founder of Cardiff Productions and a non-executive director at ITV Studios Ltd. He was previously Chief Creative Officer of BBC Production (Studios), responsible for over 3000 BBC programme makers. He is Chair of the Council at Cardiff University.