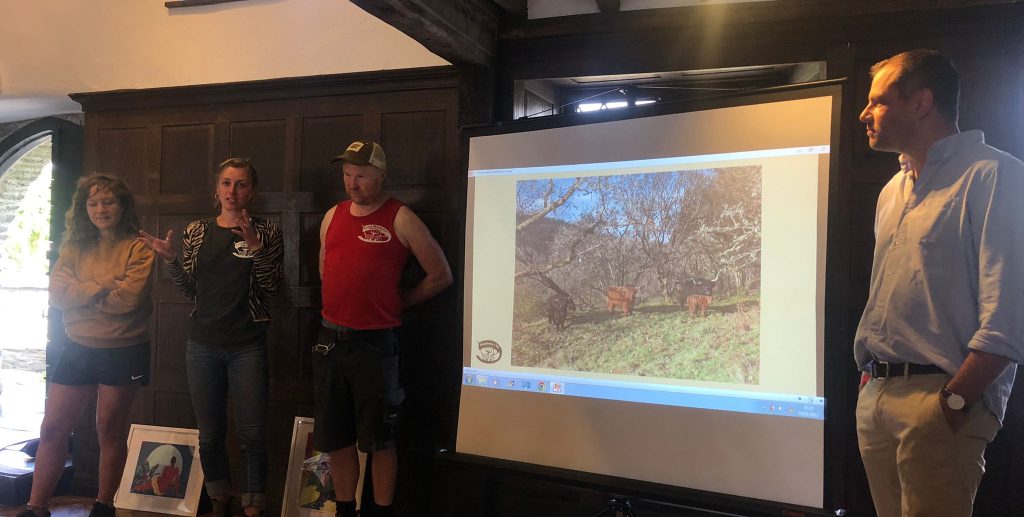 Doug Specht with Brittany Oakes of the Real Farming Trust, and Yali Banton-Heath and Joe Hope from the Land Workers Alliance.

Doug Specht has chaired a session on agroecology, food sovereignty and climate justice at the El Sueno Existe festival held in Machynlleth, Wales. The session noted that the climate crisis, COVID and war related disruptions to food supply chains have resulted in grave threats to the lives and livelihoods of millions of people across the world. These successive crises demonstrate how precarious our current transnational, corporate-driven food and agriculture systems are as well as being grossly exploitative of people and the environment. The talks draw upon  the work of La Via Campesina, the global movement of peasants and indigenous peoples, which has been denouncing global food corporations and advocating and putting into practice solutions  based on the principles of land rights, agroecology, food sovereignty, and social transformation for thirty years.

Specht – who was chairing the session in is role as chair of the Environmental Network for Central America – was joined in Machynlleth by Brittany Oakes of the Real Farming Trust, who provided an overview of La Via Campesina, and Yali Banton-Heath and Joe Hope from the Land Workers Alliance, who provided an UK, and specifically Welsh perspective on food sovereignty. Joining the session via video were members of the Gloria Quintanilla Co-operative which works with the Nicaragua Rural Workers Association (ATC), and Fabio Fabretz, of the Brazilian Landless Workers Movement (MST).

The panel was organised by the Nicaragua Solidarity Campaign, who have worked with organisations and movement in the UK promoting social, economic and environmental justice since 1978. And since 2019 their main partner organisation has been the Rural  Workers Association (ATC), a founder member of La Via Campesina.

The session formed part of the wider El Sueno Existe festival which celebrates the life and work of Chilean teacher, poet, singer-songwriter and socialist, Victor Jara, who was tortured and killed by the dictatorship of Augusto Pinochet. The event comprised over 30 workshops, with a wide range of speakers, including Jeremy Corbyn, and the Peace & Justice Project. With workshops exploring grassroots communities in Latin America, and the struggles for peace and climate justice that affect us all. Speakers ranged from academics, journalists, artists, activists, film makers, poets, campaigners etc. bringing a huge wealth of experience and commitment to the festival.

Fantastic weekend in Wales at El Sueno Existe. Great to hear from Corbyn and to be part of discussions and workshops on agroecology and climate justice. Amazing music too! pic.twitter.com/BPhpFKp4s0