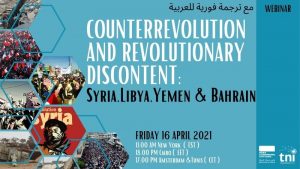 The things you always wanted to ask about Syria but were afraid to. Four key things you aren’t being told about Yemen. What you wanted to discuss about Libya but were too depressed to even begin. What were the popular demands in Bahrain that were crushed before one could pronounce the word revol—

Indeed, Syria, Libya, Yemen and Bahrain have all been key parts of the Arab revolutions. But a decade on, these events have almost completely faded from that framework. The Arab uprisings were celebrated as world-changing events, but these incredible efforts against authoritarianism also morphed into divisive violence. Many attempts to resist socio-economic exploitation were met with resistance from the state, often in conjunction with global capital and foreign interference. The brutal descent into civil wars in Syria, Libya and Yemen and a succession of crackdowns in Gulf countries like Bahrain, shows the cynical proxy-logic so reminiscent of the colonial schemes this region is all too familiar with.

We will discuss all these issues with four brilliant guests where we re-visit these key examples to help us understand how revolutionary processes are imbued with ups and downs, with gains and setbacks.

Guests:
Yasser Munif is a Syrian Sociology Associate Professor in the institute for Liberal Arts at Emerson College. Author of the ‘The Syrian Revolution: Between the Politics of Life and the Geopolitics of Death’

Ala’a Shehabi is a Bahraini activist scholar. Deputy Director of the Institute for Global Prosperity at University College London (UCL). Co-editor of ‘Bahrain’s Uprising: Resistance and Repression in The Gulf’.

Lucia Pradella is a Senior Lecturer in International Political Economy at King’s College London. Works on capitalism, border imperialism in Libya and the disciplining of labour across the Mediterranean.

Helen Lackner has worked in all parts of Yemen since the 1970s and lived there for close to 15 years. Author of ‘Yemen in Crisis, the road to war’